Hi Fangsters,
And welcome to the show.

There's something pretty profound about rewriting the Bible but that's exactly what I'm doing. The "Fango Fables" Bible that is. 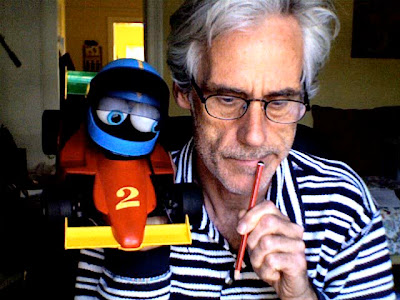 There's something kinda poetic about the fact that the word "fango", which I'd thought we'd made up as the title to an art show we held in Bathurst in race week 1995, to combine fanging (FANG v.i. to drive ones car at a very great speed [from Juan Manuel Fangio, Argentinian racing car driver, five times world Champ] Macquarie dictionary), with a little bit of "fandango", a little bit of "Mambo", and a dash of GO, why heck it just sounds good, well it's also an Italian word meaning mud.
My name is mud!
Fango Art Show 1995 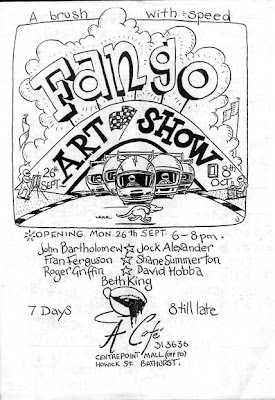 Yes, the stuff we crawled out of, and sometimes slide into, and along with the "Big Banger Theory" (see Fango Fable's A Day at The Races) it's all a part of Fango mythology.
ANYWAY, it's hard work, but necessary, to play God here, and clarify in my own mind at least the top to bottom, side to side consistency and population of the Fango universe.
Here's a record of the third Fango Art Show from 2005.
Funny how many similarities there are with Roary the Racing Car. Great minds...I guess.
Is it not possible that the original creator of Roary, who had managed both Silverstone and Brands Hatch race tracks in Britain, visited Bathurst for the "Great Race" in 2005, and happened upon our art show which was running at the same time and was promoted all over town?
Roary was first broadcast in May 2007.
Theirs 2007 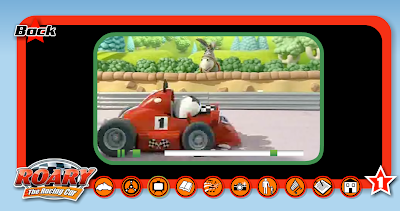 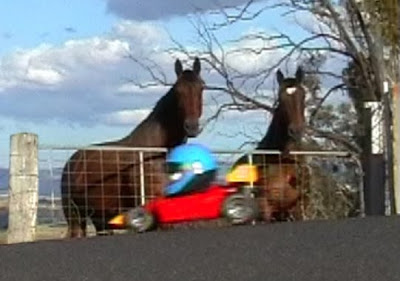 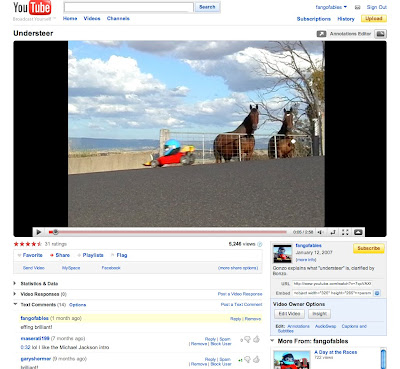 Excellent that the upload date of the video on Youtube acts as proof of my projects originality.
I'm not getting too caught up in all that.
Oh ok, just a little.
When the Roary people announced that their new character named "Conrod" will be voiced by Craig Lowndes, well, it just felt like they're straying onto my patch a bit.
After all, I've had McPhillamy since 2004.
nb. McPhillamy Park and Conrod Straight are both named features on Mount Panorama race track Bathurst. 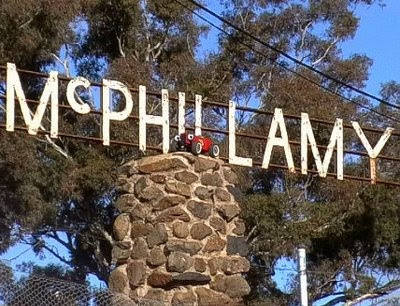 I still much prefer my character Gonzo's design to Roary's, and because their program is aimed at toddlers it can't be (in their minds at least) as funny, intelligent, or absurd as I like to make mine.
Going through my films, digging out some screen grabs to illustrate the Bible, I've been quite delighted with the aesthetics of the thing. Most encouraging.
I'm having fantastic daydream "visions" of scenes and story elements, busting to get back onto the scripts to apply some structure and dynamics to improve the storytelling.
And here's the original "SPEEDY GONZALES", that's right, Warner Bros. based their character on this bloke, FROILAN GONZALEZ, a fabulous historical character.
He was an Argentine GP racer of the 1950's and early 60's.
This is him on the left, beside his good friend, and fellow countryman Juan Manuel Fangio. 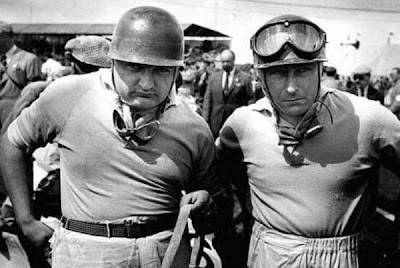 His Argentine nickname was Cabezon, literally "big-head", a play on both his courage and his obviously large noggin, and his English nickname "the Pampas bull", both his origins and aggression on the track. 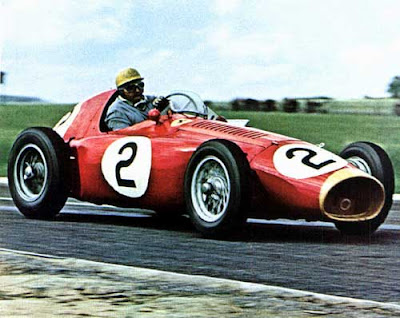 He was the first ever Grand Prix winner for Ferrari (Britsh GP 1951) , and you can see Enzo Ferrari hugging and kissing him at the end of the race.
The extraordinary thing is that I didn't know about this fella until well after I had created my Gonzo, in a red car, with the number 2. Love it.
I reckon number 2 is a far more interesting number for a character than number 1.
I was actually referencing the go-for-it nature of "Gonzo journalism" and the Warner Bros. character, and was prepared to change his name if they came after me as it would be a sure sign that the project was getting somewhere if they felt it was a copyright infringement worth pursuing. 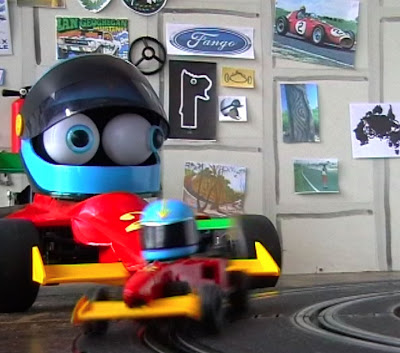 Also on the shed wall is another beautiful coincidence.
In about 1997 I painted a large picture of Forest Elbow at Mt Panorama, a tiny reproduction is above Gonzo's left front tyre. Here's a close-up. 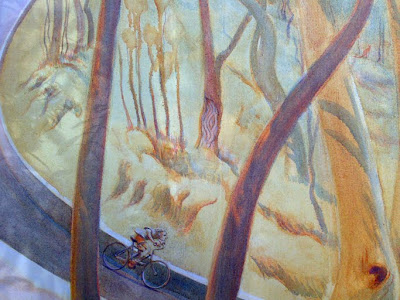 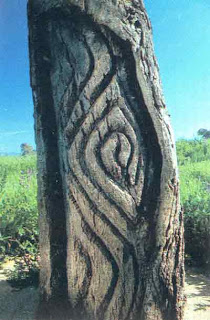 It turns out that the carved gum tree I copied from a book is actually on my great grandfather's property at Molong, NSW. Nice.
I think of coincidences as a cosmic thumbs up.

Posted by jock alexander at 8:04 am